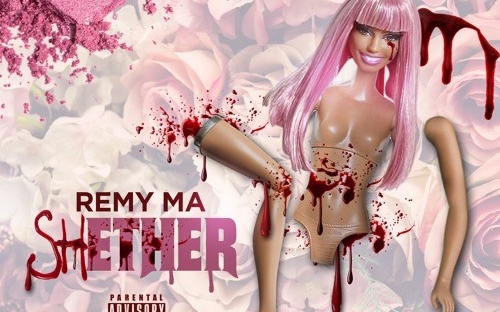 Sometimes You Have To Adress Situations Head On.

DID YALL HEAR WHAT REMY MA SAID ABOUT NICKI MINAJ? Sheeesh! I am still trying to recover. The beef between these women have reached a whole new level, and honestly, I blame Nicki. Nicki is always throwing subliminal shade at another artist. But yesterday on February 25, 2017, Remy Ma released a bone shattering diss track about Nicki Minaj entitled shETHER. A play on words from Nas’s 2001 diss track entitled ETHER attacking Jay Z. Remy Ma, literally embarrassed Nicki Minaj. shETHER is going down in the diss track hall of fame along with Nas; ETHER, Eminem; Warning, 2pac; Hit Em Up, Biggie Smalls; Kick In The Door, Ice Cube; No Vaseline, Jay-Z; Take Over, Snoop Dog; Pimp Slapp’d, Canibus; Second Round KO and most recently Drake; Back to Back.

To my conservative friends, I know you all may be a little disappointed with Remy & Nicki, two women of a particular age, calling one another every nasty name that popped into their minds. You may be saying, ‘Women are not supposed to beat one another down. We are expected to empower one another.” The truth of the matter is, this is what Rappers do; they have rap battles. Rap is a genre of music that focuses a lot on speaking/rhythmic stylized chants. Rappers often speak a raw, unadulterated truth about their personal experience in life. Remy Ma was clearly tired of Nicki Minaj taking shots at her subliminally in her songs. Remy Ma made sure she went for Nicki’s juggler. There is no way after shETHER, Remy and Nicki could ever be cool again.

Now you all know I have to always spend a scenario to where the topic is relatable to our everyday lives.

In a perfect world, many people would say, “If you have an issue with someone, just meet up, have a sit-down conversation and discuss the matter.” It doesn’t always work out like that, especially in cases where the other party doesn’t take responsibility for their part in a case. Secondly, people who subliminally spread messages about other people, whether it be a long conversation, post on social media or behind someone back, in my opinion, are cowards. Thinking because they’re telling someone off on the “down low” that they have spoken their piece. However, they cannot get mad when the other party gets a whiff of the trash talk and call them out on their mess, embarrassing them off every defiled thing they’ve ever done in life. That is what happened to Nicki. Nicki threw some subliminal shade in her music about Remy, and Remy openly read her for filth. Remy Ma tackled the situation head on. Sometimes saying how you feel has to be done to put people back in their place.